34. That’s the number of times a man thinks about sex on average per day.
The same number for a woman is 19.* 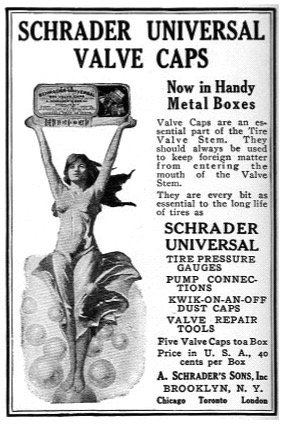 This shouldn’t come as a surprise, given that we are creatures driven by primal urges including survival and procreation. And businesses that want to sell us their products know this very well. In fact, they have been using our urges against us to sell for almost a century! Just take a look at the ad on the left from the 1920s.

Sex in advertising has always been a controversial topic, sparking a wide range of reactions from public outrage to curious attraction. We all heard about the infamous phrase “sex sells” and we are bombarded by advertisements with sexual content these days. While it’s true that including sexual elements in advertising drastically increases the chances of attention grabbing, there are numerous studies to refute the hypothesis that it actually increases sales.

Let’s start with a few examples to see how different companies use sexually suggestive ads to sell their products. When it comes to sex in advertising, the first brand that comes to mind in North America is Calvin Klein. Those who are old enough to remember the commercials featuring Brooke Shields know what I mean. If you don’t, just take a look at the video below:

Keep in mind that this was the early 1980s when sexually suggestive commercials were not as common as it is today. In fact, it wouldn’t be incorrect to say that this is the ad that started the trend to use sex to sell a product in the modern era. The ad was controversial to say the least, as it was successful. Calvin Klein jeans shot up to two million pairs a month in sales and the company, seeing the potential of this new advertising strategy, took it up a few more notches over the next couple of years by rolling out more controversial campaigns with Mark Wahlberg (then known as the rapper Marky Mark), Christy Turlington and Kate Moss. Despite the public outrage, protests by anti-pornography groups and even cancellation of certain campaigns, the company enjoyed increasing sales over the course of next two decades. In the 2000s, Calvin Klein started facing heavy competition from new players with the likes of Abercrombie & Fitch and American Apparel. It was almost as though the company’s code for growth was cracked when other firms started using the power of sex and controversy in their advertising. It became almost standard issue for clothing brands to create racy, sexual and sometimes soft-pornographic advertisements to spark public fury and capitalize on the free publicity that it creates. Just a quick look at the assortment of advertisements below will give you a better visual idea of what I mean: 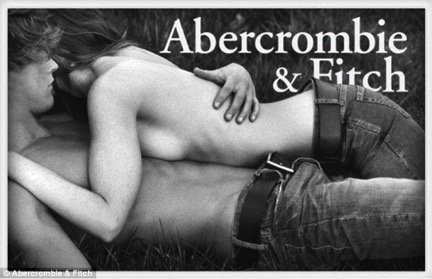 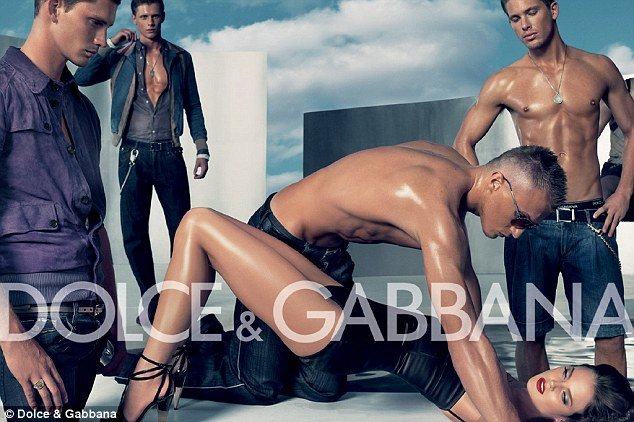 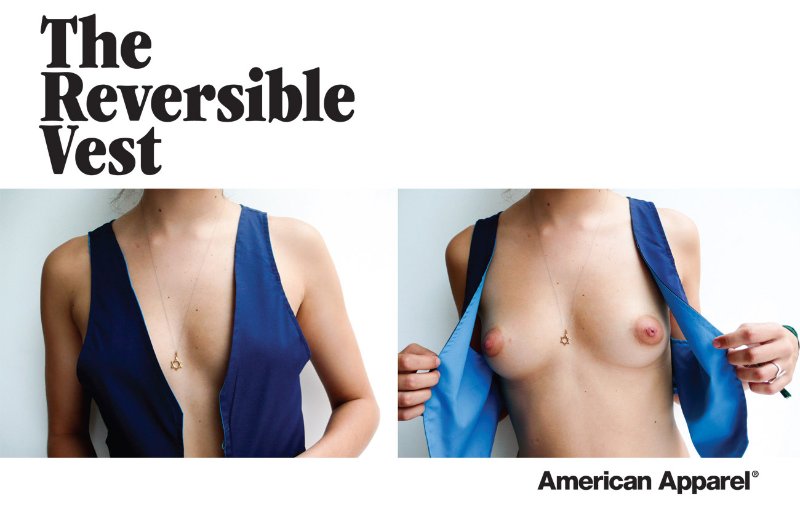 As these cases indicate, sex in advertising works when it comes to creating awareness and buzz for your brand. The question is whether it’s the sex that sells or the controversy it creates. To answer this, let’s take a look at a study conducted in 2007 at the University College London. This research looked at the recall of sexual and non-sexual television commercials embedded within programmes, with or without, sexual content. To do this, the researchers divided 60 adults into four groups, two of them watching a sexual program (Sex and the City) and two of them watching a non-sexual TV show (Malcolm in the Middle). Each TV episode was embedded with either sexual or non-sexual commercials to measure brand recall. After the experiment, the participants were asked to remember the names of the brands they had seen during the commercials. The results, as you can see below, are quite fascinating in that the group that watched Sex and the City had a much lower recall rate than the other group, regardless of the content of the commercials. The researches concluded that the existence of sexual content in a program impairs the ability of the brain to focus on other content.

Putting this academic research into a business context, it could be quite possible that over the top sexual content in advertising may actually be working against a brand. Sexy models and/or nudity might attract initial attention from the viewers, however the actual brand message is often eclipsed by the sexual content of the advertisement. This is further supported by another study** conducted by MediaAnalyzer Software & Research, where 200 subjects were shown ads ranging from suggestive cigarette ads to very unsexy credit card promotions. The results showed that especially men had a much lower brand recall than women when it comes to commercials that include sexual content, as they spend too much time looking at the suggestive content, rather than the brand message itself. 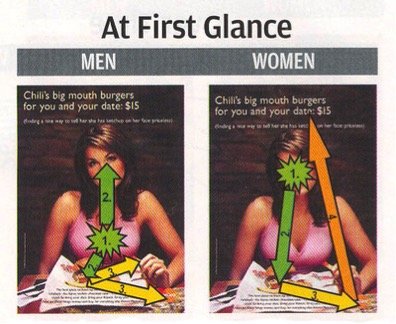 MediaAnalyzer used the above image to sum up its findings from the research. This picture perfectly explains the difference between the way a man and a woman looks at an advertisement and why brand recall is much lower within the male population.

Another explanation is about the product itself. According to Jeffrey Richards, an advertising professor at the University of Texas, sex only sells if the product you are selling is related to sex. So if you were selling, say, condoms, then it would make perfect sense for your brand to create an advertising campaign around that. But Richards says that when companies use sex to sell very unsexy products, consumers might be intrigued but they are not going to remember your company name, or the product you are selling.

To recapitulate some of the arguments about sex in advertising:

Sex in advertising remains to be a very debatable concept and what is memorable and acceptable to one person might not be for another. Having said that, the data suggests that there is a correlation between sexual content and brand recall, which is why companies should be careful when designing a risqué ad campaign.

Going back to the Calvin Klein example one more time, it is undeniable that the controversy that sex triggers has a multi-prong effect that not only intrigues people about the brand and the product, but also creates an attraction towards the condemned. Just like a movie or a book becoming popular after being banned, the same principle applies to the ad campaigns that are publicly denounced, creating buzz and curiosity around them. Calvin Klein took advantage of the free publicity and the controversy it created through its racy ads for years and it has proven to be quite powerful. To me the question still remains: is it sex that sells, or the controversy?
[divider line_type=”Full Width Line” custom_height=”10″]

* The numbers are derived from the study conducted by Dr. Terri D. Fisher, Professor of Psychology at The Ohio State University at Mansfield. (https://www.psychologytoday.com/blog/the-sexual-continuum/201112/how-often-do-men-and-women-think-about-sex)
** http://www.adweek.com/news/advertising/does-sex-really-sell-82104