You’ve probably heard the expression “one man’s trash is another man’s treasure”. Now, trash might not be the best analogy for ice but the expression holds true when we think about the ice trade of the 19th century. 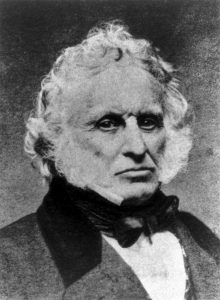 This is Frederic Tudor. If you’ve never heard of him before, it’s okay. Neither had I until I recently read Steven Johnson’s brilliant book “How We Got To Now” where he presents 6 discoveries humans made that propelled our species forward to where we are today. And believe it or not, ice was one of them. I am not going to talk about why ice was a game-changing discovery and how it affected human civilization in this article but instead I want to share some interesting facts from Tudor’s venture as the largest ice trader of his time.

What is the big deal with ice?

In the 19th century, ice was a luxury good that was mainly consumed by the rich. Unless you were living in a cold climate where water froze in winter to create natural ice, it was not attainable for the average person.
Frederic Tudor was born to a wealthy family in Boston. As a young man he spent a lot of time in the American Northeast, as well as Cuba. Having experienced extreme cold and extreme heat, he thought that people in warm climates like Cuba would benefit greatly from the wonders of ice, which was abundant in Northeastern United States. It’s also important to note that in the 19th century, ice was the closest thing to refrigeration; it was not only used to cool drinks but also as an air conditioner. (It was not uncommon for hospitals to hang large blocks of ice off the ceiling to cool the rooms).

Tudor’s idea was simple (at least in theory): cut blocks of ice from the frozen lakes and rivers in New England and ship them to warmer climates where people had no access to ice.
There were a few major challenges with this idea, the most important of which was keeping the ice intact without melting during shipment. Over the course of a decade Tudor tried different ideas and lost his entire family fortune in the process, going to debtors prison twice. But he never gave up. He believed that he had a great idea and despite all the hurdles he wanted to see it through.

From prisoner to “The Ice King”

His breakthrough came when he finally discovered the perfect way to insulate the ice while traveling on ships for weeks on end: sawdust. He found out that the sawdust was a much more efficient way to keep the ice intact than hay, which is what he had been using until that point. From that moment onward, his business took off and he died a millionaire in 1864.
Now here’s the brilliance of this entire ice business: Tudor took a product (ice) that cost nothing except the labor to cut frozen chunks out of the lake, he then shipped it for a bargain on boats that were travelling practically empty on their way south, using an insulator that cost him nothing because sawdust was the byproduct of forestry industry in New England and was practically everywhere.
Free ice, free sawdust, empty vessels.

An average New Englander’s “trash” became the “treasure” that Tudor “The Ice King” delivered to far away places.

Tudor’s ice trade was also one of the first examples of a “zero-waste” business model, without even consciously trying to be a sustainable operation. His product was naturally occurring in one part of the world, covered by a recycled byproduct from another industry, transported on vehicles that would otherwise make the trip empty and waste fuel, as well as space.

Lastly, Tudor’s ice trade was a major paradigm shift in business principles. Up until that point, businesses were always attracted to “high energy” locations. Warm climates had fertile soil that could be worked all year round and yielded good produce whereas places like the American midwest were cold with barren lands that could not be used half the time. Never before Tudor had anyone considered that these cold places could offer anything to the rest of the world, let alone frozen water.
Looking at the ice trade of the 19th century in hindsight may not impress us too much, since most of us were born into a world that had refrigerators. (I don’t remember not having a refrigerator ever). But when we think about these events in their own context it becomes a whole different story. People like Tudor are the visionaries of their centuries. They could see what others did not at the time and were probably considered crazy. But that’s just the thing about visionaries, their ideas are so far ahead of their time that sometimes it takes decades for the rest of us to catch up.